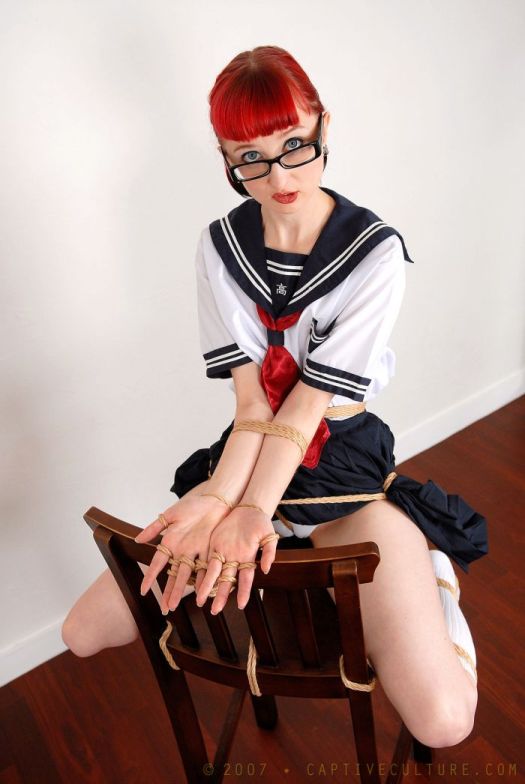 Here is the second set from the last shooting I did with Anaïs. We ended our collaboration with a cool session and some great pictures during the first photo series including the one used by wikipedia for a decade now. After the dark background, I worked in front of the white wall again which gave a different atmosphere. I had no plans with my ropes and I found my inspiration making knots after knots, starting with something classic before to build an original and total immobilization including one of my favorites, tight ropes playing with my model’s fingers. I would like to thank my flickr friend Warai Otoko who brought the uniform for the day : it was a great idea and Anaïs was looking great wearing those clothes. He also took some cool backstage pictures with his camera while I was taking my owns between some rope additions. I don’t have a lot of things to write about the session, everything was cool, we worked having fun, discovering our german guest and laughing about lot of things. Of course, the ties were strict and Anaïs got some nice ropemarks. I also tried something new, Anaïs was blindfold with ropes around her head. You will notice the tight crotchrope and I encourage you to watch how her fingers were tied (alternate levels on the horizontal axis). In the end, I changed the position for something more classical, playing with her hair : I gave the camera to my guest for this step but we didn’t get a lot of pictures … the day has been long and we were all tired. I ended the session with two portraits and one cool picture about the rope tied to the white panties. I let you download the pictures now, I hope you’ll enjoy it and, as usual, use the contact page if you need to report a broken link. Thanks !

This site uses Akismet to reduce spam. Learn how your comment data is processed.